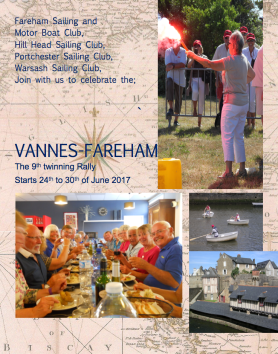 The sailors of Vannes visited Fareham in the period 24th – 30th June 2017. This is the 9th such visit. A committee of representatives of the participating Fareham sailing clubs – Warsash SC, Hill Head SC, Fareham SMBC, and Portchester SC – planned the visit.  Fareham families hosted individual crews from the Vannes boats. Here is the programme for the visit:  Programme.

17 June; the leading boats of the French Flotilla have reached Guernsey and are heading today to Cherbourg.

24 June: The Flotilla has arrived! A reception was held at Fareham Sailing Club. The arrival was captured by the BBC and appeared on ‘South Today’. BBC Radio Solent also attended and did interviews with Fareham’s Mayor, Monique Moutaud Président of Vannes-Fareham Voile, and George Pickburn Chairman of the Fareham Clubs Organising Committee. The Vannes sailors’ visit is due to be featured on Radio Solent 96.1 FM on Saturday 1st July in the breakfast show at 07.30 or 08.30.  After that it will be available to listen to as a podcast via the BBC Radio Solent website.

Here’s the French flotilla, accompanied by local boats, in transit from Yarmouth and entering the River Hamble on a rather overcast day.

26 June: The French party was invited to the Mayor’s Parlour. They were shown the Council Chamber and Monique Moutaud presented the Mayor with a memento of the visit. We took a picture outside the Civic Offices.

The party then moved to Fareham MBSC to meet the Creek! 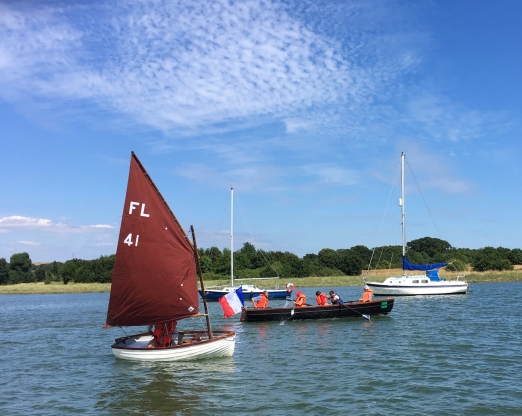 And enjoy a cake or two!

27 June:  Darts at Hill Head SC, and une soirée amicable at Portchester Sailing Club, with a hog roast and lots of sea shanties!

28 June:  To Portchester SC for presentations by the Coastguard and a visit to Portchester Castle. Then on to Hill Head SC for supper.

30 June: Farewell Dinner at Warsash SC, with a hearty sing-song to conclude the visit.

Here is the report of the visit as it appeared in the Warsash SC newsletter, the Lobster’s Log, and here is the French brochure recording their cruise and visit to Fareham.

You can find the report of the visit of Fareham sailors to Vannes in 2015 at: Twinning Sailing Cruise to Vannes 2015

Fareham sailors have been invited to sail to Vannes in 2019.

View all posts by farehamvannestwin